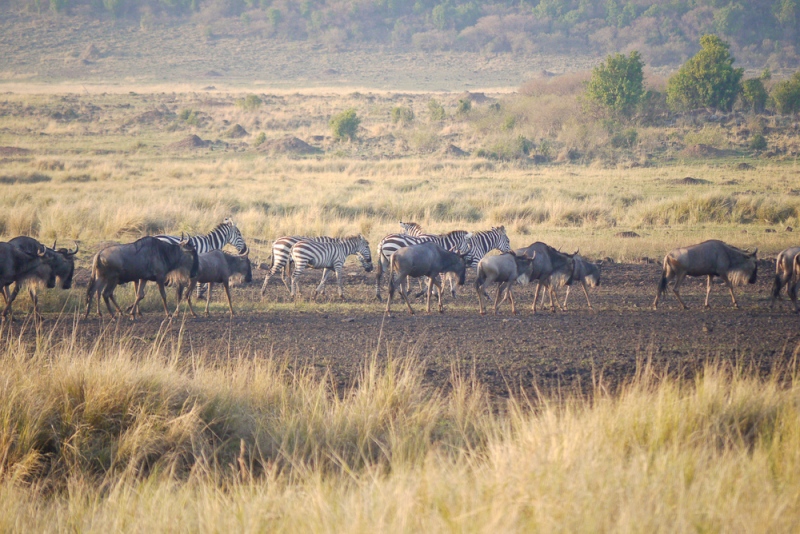 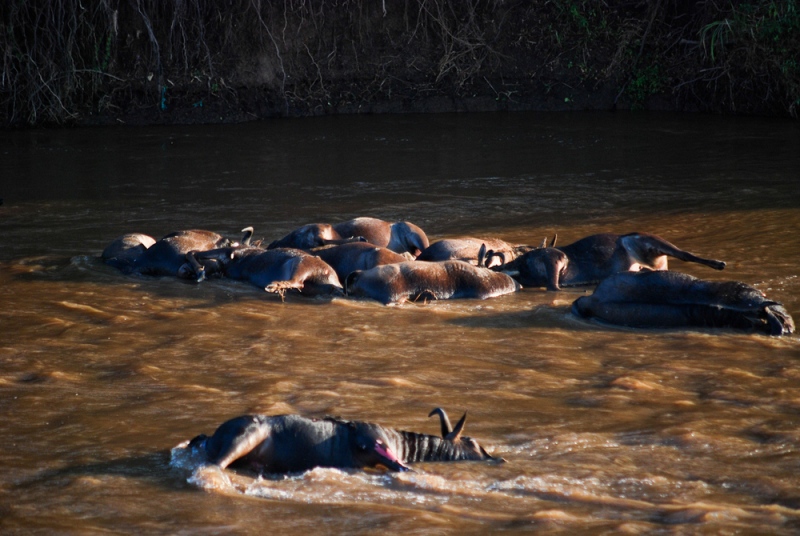 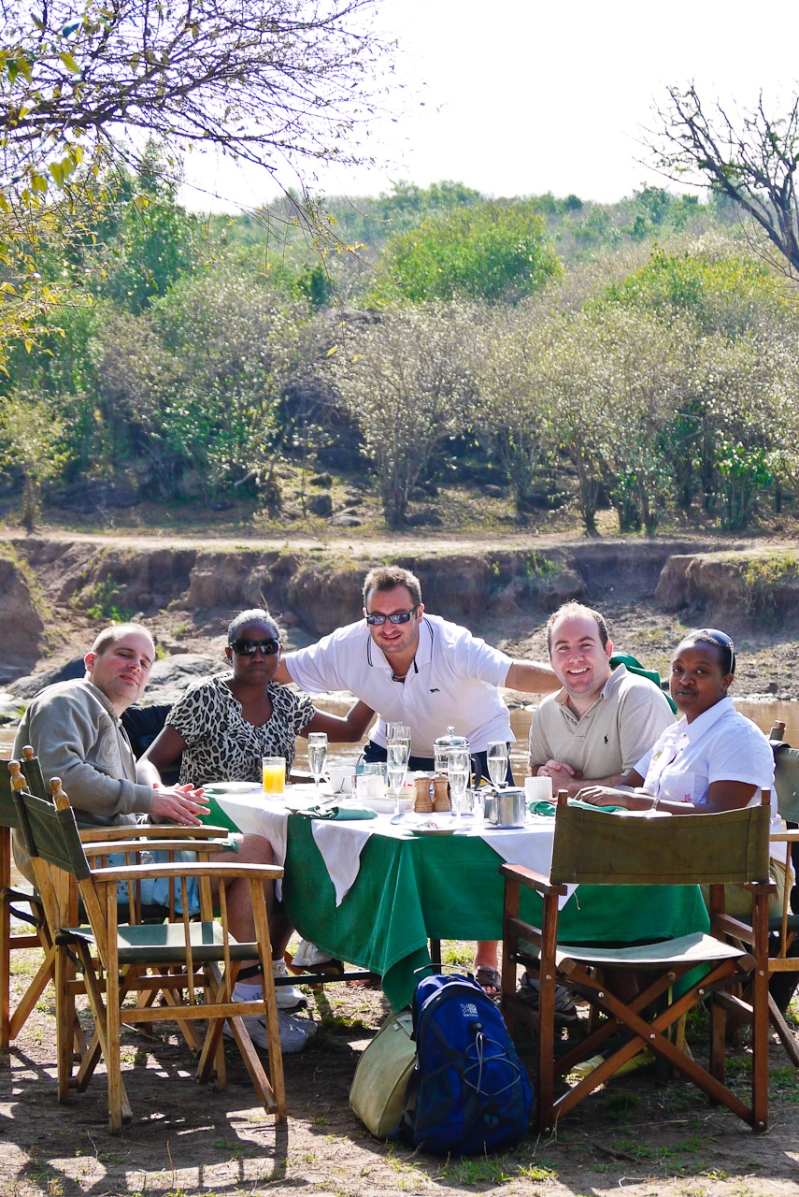 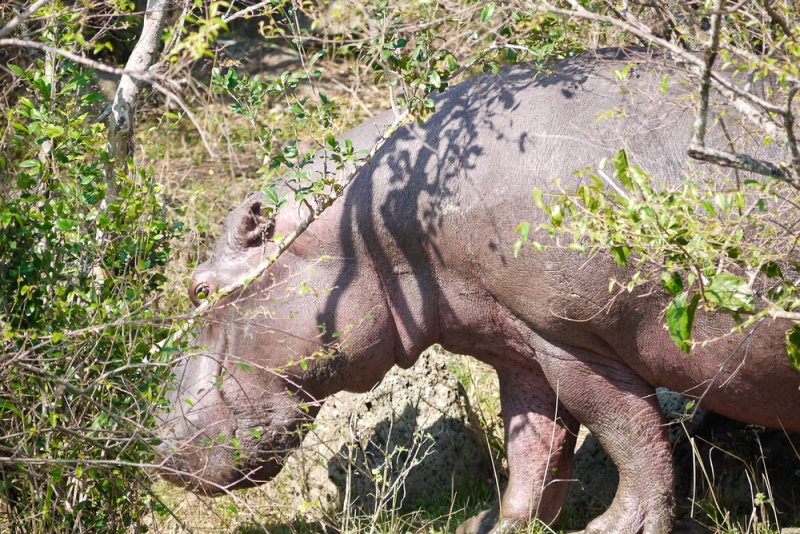 I’m sharing a room with steve and last night we stayed up chatting for a while. sometime around 2am, we turned off the lights and tried to get some sleep. After a few minutes we heard a very loud noise, a combination of roar and flatulence. We’d been hearing animal noises all night, but this time it appeared to be right outside our window.

We crept up to the balcony doors and opened up the curtains to see if we could spot the source of the noise. We did not need to look hard as not more then 20ft in front of us a huge hippopotamus was happily grazing away. We were pretty shocked to see this as we’d not expected something like this to come so close to the hotel, especially given that we were a miles from the river and the area was so brightly lit. The hippo continued to root around and we just had to stand and watch in amazement until it made it’s was back into the darkness.
Just a few short hour later we were heading out for our next game drive at the crack of dawn. We asked if anyone else had seen the hippo last night. Jackie and Carl said that they had spotted it earlier, but nowhere near as close as we had. Jeff heard the noise, but had not gotten up to investigate.
We headed back down to the site of the yesterdays wildebeest crossing. Again there were hundreds waiting to cross, but this time there were a few zebra dotted amongst them. We had also been joined by a multitude of carrion birds who circled overhead or rested in the branches of the surrounding trees. The river was lined with scores of wildebeest bodies that had not survived the crossing and these birds would undoubtably be fed well tonight.

It was unanimously decided that the wildebeest is the stupidest creature on the planet. Only marginally ahead of BNP voters. We watched stupefied as they could survive the crossing, only to reach safety, turn around and jump back in. Later in morning we would watch individuals approach hunting lions without realising the apparent danger. I have decided to rename them bewilderdbeest.

Something that we had booked before arriving in Kenya was a breakfast near a spot known as the hippo pool. We were met by a Mara warrior who took us throughout the bushes and then produced a bottle of champagne! Now rather surreally we continued throughout the bush until we reached a table that had been set-up for us right on the rivers edge. Hippos were basking in the morning sun, the heads just visible above the waterline. It was difficult to count their numbers as the bodies of wildebeest had been carried downriver and were collecting on a outcrop of rocks, making it a rather surreal setting for a breakfast.

The food as usual was great, and afterwards the Massai that had greeted us took us a short way into the bush. We went around the corner to discover a very large crocodile b basking on the riverbank. Keeping quiet to avoid disturbance, we crept a little closer and took some photos. A little further along we encountered another crocodile, this time accompanied by a very large hippo and a giraffe. We stood watching the scene, when a large bird landed on the water which disturbed the crocodile. This in turn made the hippo jump and it rose out of the water with a massive splash.

We made our way back to the jeep and headed out to a Massai village a little outside the park, where we had made arrangements to meet the villagers and their way of life. I’ll write more of the Massai in a separate piece, as they deserve more then a cursory paragraph or two.

After the visit, we had lunch back out the lodge, together with a brief rest to recharge our batteries – both figuratively and literally with our camera batteries nearing empty; before heading out on the evenings game drive. During dinner we found out that we would be unable to stay for a further night as we had hoped as the hotel had an additional influx of guests and just not have any room spare at all. Whilst disappointing, it was not unexpected and simply means that we will be heading back to Nairobi tomorrow morning as we had originally scheduled.

This game drive did not as spectacularly as our previous attempts. We drove for long periods without seeing anything new, or without seeing anything at all. A hard feat given the amount of wildebeest roaming the lands. we did eventually strike gold with the sighting if another rhino. We headed closer and established that this was a different animal then we had perviously encountered. This one was also not alone as when she moved, we saw that she had a baby with her. Even baby rhinos look like they could cause some serious damage if pushed.

With the light now fading we headed for the area where we saw the lions hunting the previous day.
Here we got exceptionally lucky. We watched as a lioness brought down a lone wildebeest. it struggled to it’s feet, but the lioness went in for the kill. However instead of making the killing blow, the lioness found herself one the receiving end of a charge from the wildebeest and had to retreat. The wildebeest lived for another day, but given that it was limping badly as it made it’s way back to the heard, it probably does not have the best odds for survival.

The rest of the pride was located nearby and we watched the younger members fight amongst each other and use a tree as a scratching post. One of the cubs came down just a few feet from the jeep and lapped water from a puddle. I’ve said it before, but it really does surprise me just how closely most of the behaviour is in common with the domestic cat. Take away the ability to take down something as large as a wildebeest and you could imagine one sleeping in your front room!

So it’s off to Nairobi tomorrow, and we’ll see what that brings.

This site uses Akismet to reduce spam. Learn how your comment data is processed.